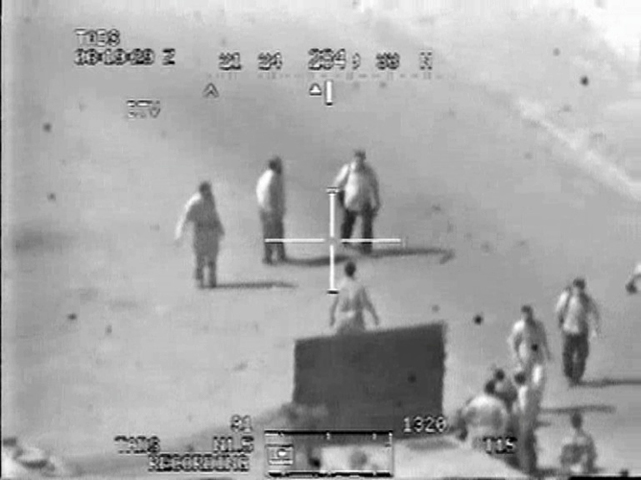 this makes me sick:

today, wikileaks released a military video and transcript they acquired depicting US helicopters gunning down a group of Reuters journalists in Iraq.

the cameras slung over their shoulders were mistaken as AK-47s and RPGs (rocket-propelled grenades).

the video is 3 years old, from 2007, so it’s irrelevant to get up in arms about what is the President doing about this — he inherited this war.

and, as the guys on the helicopter seemed to legitimately think that the people they were looking at were armed, what transpired is unsurprising.

nothing in this video is new.  we know stuff like this happens all the time.   but i had a random thought as i watched the first few minutes of the clip (i couldn’t watch the whole thing) that i think is the most important thing about this war, and about modern warfare in general.  about the time when the guys in the helicopter requested permission to engage with the people they found on the ground and the response on the radio is “uh, we have no personnel east of our location, so, uh, you are free to engage” it occurs to me what type of people are involved in this war.

first off, i know that the helicopter was sent as an advance team for a troop movement.  they’ve got their guys coming and they don’t want them to get into any trouble.  the guy (presumably a superior officer) giving the go signal sounds distracted and, more than that, he sounds like the 20 year old checker at the grocery store with the ripped jeans with a stoned expression saying, “wait, what did you say?”

yes, they saw cameras and thought they were AK-47s (and more fantastically, SMGs), but from that far away, could you do better?  the crime here is that the superior officer didn’t care enough to maker sure that they were sure they were weapons — which, presumably, is just representative of how the game is played — there’s not enough time to do a full reconnaissance, so you just have to make quick, on-the-fly decisions and some of them are fatally wrong.  that’s what happens in war.

this is what is brutally clear to me and makes my stomach turn: the people fighting for us in other countries?  they are just like anyone else you see.  they aren’t any more special, smart or fast than anyone else.  trained?  yes.  skilled at disassembling and reassembling weapons? sure.  but they are just as flawed as the guy who works the counter at the 7-11 up the street.

video below.  full transcript here, and you can read the timeline of events here.