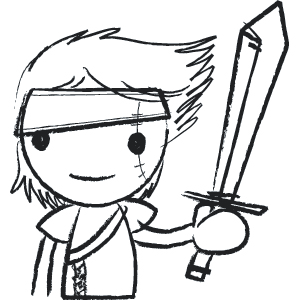 Our son loves reading.  He’s recently gotten way into The Magic Treehouse series and we’ve since completed the full series (all 45 books!).  It occurred to me, since he’s so interested in storytelling, that he might be into those Choose-Your-Own Adventure books that I wasted my youth reading and re-reading until every possible scenario had been played out.  That had mixed success (mostly due to the actual story — which was some crazy alien space opera with names that had more consonants than they had a right to).  I started wondering about the options for RPGs for kids — surely they’re out there, right?

I came across this article from GeekDad, who has been trying to introduce role playing to his kids.  Apparently, Dungeons & Dragons has wised up and started tapping the limitless potential of getting kids hooked on gaming before they’re in their double-digits.  And why not?  It’s storytelling, it’s family time, it involves math and reasoning and — if you run it well — could bring in history or social studies or any number of other educational subjects.  Plus, it’s fun as hell to bash on a monster and rewarding when you emerge victorious.

So I downloaded Monster Slayers: Heroes of Hesiod, which is a little mini-scenario with a very basic framework with the idea of introducing young or novice gamers to role playing.  I got the pages printed out at the FedEx Office, laminated the character tokens and mini character sheets and the badges they are awarded when they defeat the monsters.  The general premise of the scenario is just a training exercise — the player characters are kids who have to be trained to fight because their village is always being attacked by monsters. It was a hit!  But it quickly became evident that the limitations of this particular scenario would start cramping the kids (and, honestly, the adults — my wife and I) pretty quickly once we ran through the same basic hack and slash adventure a few times.

So, I decided to modify it a bit.  Create a little halfway house between the basic, stripped-down Monster Slayers rules and full-on Dungeons and Dragons D20 rules.  I created similar character sheets, adding a new Monk character just to throw in some variety, and gave everyone some basic weapons and armor based on their classes.  Each character has one special ability, which correlates to some spell or skill or feat that their character can do (based, again, on actual D20 rules — possibly a bit fudged here and there).  I came up with a very simple adventure (which lives entirely in my head), designed a couple maps, and grabbed some monster pages out of the D&D Monsters Manual.

!! Spoiler alert! DMs Only! !!
The scenario goes like this: a pack of wolves have been raiding the village’s chicken coops on the north end of town.  The heroes (now in their basic, level 1 equivalents) meet Loomis at the cabin where they’ve been conducting their training, and Loomis tells them about the situation and asks if they could help out and find out what’s driving the wolves into town and take care of the situation.  To the north (which, if you’re playing along, is equivalent to two lengths of the first map in the adventure’s documents) they find the pack of wolves led by a single dire wolf.  The wolves will attack the heroes, but they’re not really out for a fight, and will retreat — if possible — if their hit points get too far down.  If the heroes slay the dire wolf, they effectively complete the mission and the rest of the pack leaves the village alone.  Of course, I wouldn’t be much of a DM if that was all that was going on, would I?

Since Beholders played a role in the training, I decided to throw one into this scenario as well.  To the far north (the second map) there is a cave in the mountains where a lone Beholder has taken up residence, pushing the wolves out of their former territory.  Inside the cave there is some loot for any adventurers brave enough to try to defeat the Beholder.  This is a standard Monsters Manual beholder, so should be a pretty tough cookie for a bunch of Level 1s, so the loot should be worthwhile if they care to venture further.

The importance of visuals

In playing Monster Slayers, the visual aspect seemed very important to the kids, who really needed a visual reference to understand what’s going on.  It’s much harder to ask them to visualize a cluster of rocks which is blocking your view of the monster than to just point on the map and say “there”.  So I continued and made the maps for my scenario.  I also took some Lego people and fashioned Lego heroes for each PC.  It added to the interest and, I think made the whole thing a lot more fun.  Now I’m eyeing the Playmobil dragon we have and am waiting until the PCs are a high enough level to possibly take on a dragon — the relative size between the Lego minifigs and the Playmobil dragon are just about right…

I made the monster tokens for the same reason — because it’s important for them to be able to see their enemies and where they are coming from and going.  Additionally, I added illustrations to the character sheets of the weapons and armor (if any) to provide even further visual reference and more visual cues about what their character is holding and/or wearing.

We’ll see how far we get until I have to modify the rules again.  To be honest, I’m not entirely sure what I’m going to do once they level up in terms of their special abilities — I’ve considered either allowing them to do their initial special or a new one, or just giving them a new one that’s more powerful than the last one.  We’re playing with precocious 3 (almost 4) and 6 year olds, so I’m thinking simpler is probably better.

You can download the DM resources here, via Scribd.  You can also find a copy of Monster Slayers on Scribd, or download the PDF from Wizards of the Coast.