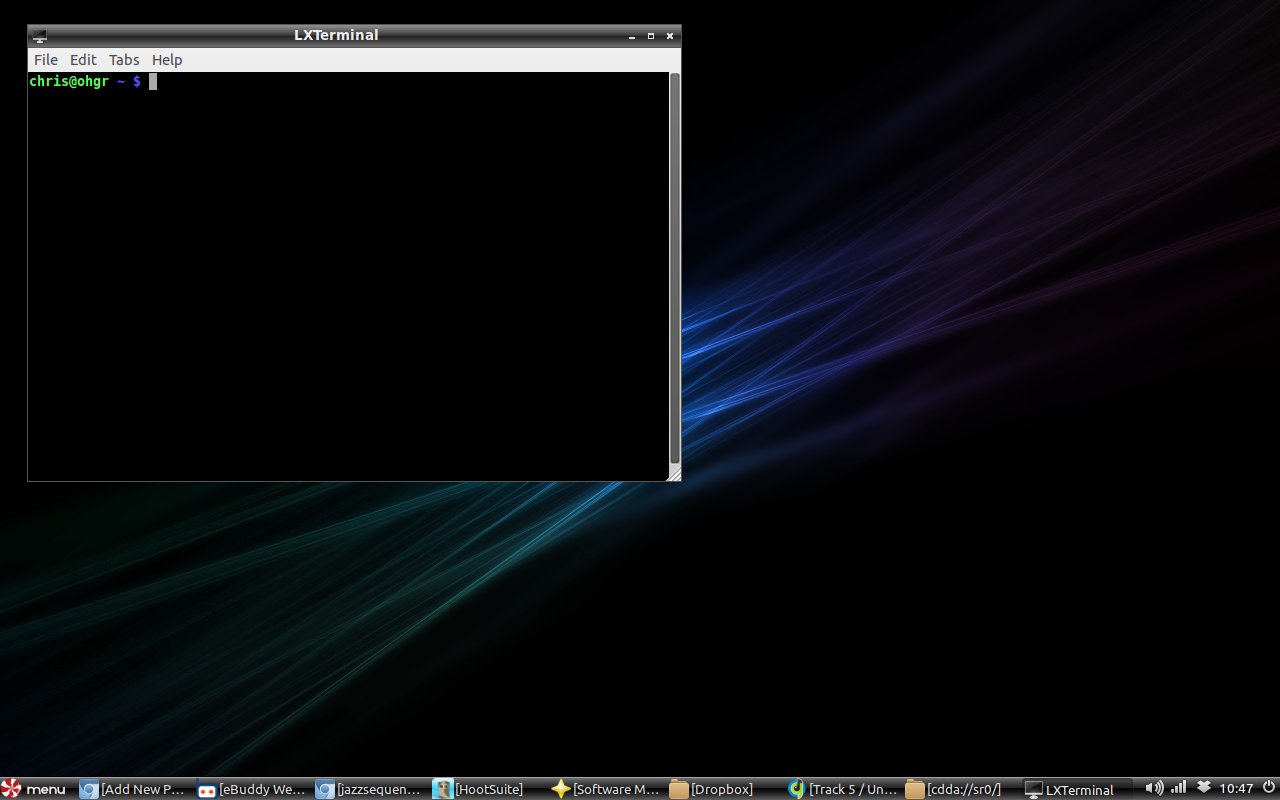 A while ago, I decided it was time to get a laptop.  I’ve been meeting with local clients more and having a laptop handy would make a lot of that stuff go more smoothly.  I’m also on the web committee for my kids’ school, and have had to borrow someone else’s laptop to do WordPress demos and show them things.

So, I started looking around at netbooks and my first thought was to (of course) install Ubuntu.  But after initially throwing a distribution of Linux onto a thumb drive and finding out that the thumb drive installation of Ubuntu is 2GB and requires you to format the drive (meaning I couldn’t use it for other things as well), I instead used Puppy Linux, which worked well for that.  Then I became aware of PeppermintOS via someone on Empire Avenue.  I took a look at the screenshots and read the descriptions and the mission statement and thought it would be perfect for the netbook I didn’t have yet.

Fast forward to now.  I don’t have a netbook, but I do have a hand-me-down Dell Latitude from my father-in-law who was looking to get a new laptop as well.  I helped him pick it out (a sweet Acer Aspire with 6GB of RAM and a 640GB hard drive — most of which will go unused since it’s been set up to do most of his work on the cloud) and I set it up and migrated his old Outlook file over to keep his email archives while he migrates to using Google Apps for email and docs.  (The conversion process went remarkably smoothly with the help of Dropbox for backing up his entire My Documents folder and syncing it up on the new machine.)

Once I said goodbye to his brand new laptop, I said hello to the old one and immediately pulled out an old Ubuntu 10.04 disc I had lying around.  I started the install — wiping the hard drive clean of Windows XP — and in an hour or so was looking at an Ubuntu desktop with one problem — though the sound worked beautifully, I wasn’t connected to the internet.  I quickly realized/remembered that most Linux distros don’t really like the wifi adapter in Dells and require ndiswrapper or some other hack to get them to work.  I tried to dig out the documentation and remember how I dealt with this last time, but gave up quickly — having no internet access (and being too lazy to dig out my extra ethernet cable) as well as running an old version of Ubuntu just didn’t seem worth the trouble to get it running right.  I decided to download the current version and use that instead.

Of course, part of the problem with Ubuntu is that it’s bundled with Firefox, and I rarely — if ever — use Firefox these days.  I wondered if there was a fork of Ubuntu that came with Chromium instead and started looking around when I remembered Peppermint, with its two flavors — one built with Firefox and Prism, and the other built with Chromium and Ice (a variant of Chrome’s application shortcuts).  I downloaded the light (478MB for Peppermint Two vs the 699MB crammed onto the Ubuntu installation disc) .iso file and burned it and started a Peppermint install.  The process was more or less identical to the Ubuntu install I just finished.

Like Ubuntu, I had no wifi.  This I expected.  I had the recommended drivers I found from somewhere and discovered ndiswrapper already installed in Peppermint (vs. not being installed in Ubuntu 10.04) — in fact, I later found a gui for ndiswrapper, which I thought was pretty cool, even if I didn’t use it.  However, after using ndiswrapper from the commandline to get my driver installed, the wifi card was still not detected.  I did some Googling and found that Peppermint has a utility to scan the hardware and look for third-party drivers.  That required an internet connection, so I got it hooked up, ran the scan, and found some Broadcomm drivers.  I clicked the little activate button and, after a restart, it worked!  Wow, seriously?  That was easy.

That wasn’t the only thing that was easy, though.  I recalled from when I was dual-booting Ubuntu and Windows 7 on my desktop that creating application shotcuts in Chromium on Linux was a losing proposition.  It was a pain to get the shortcut set up and actually functional and I ended up giving up on the whole thing.  Not so with Ice.  All you need to do is tell Ice what the url to the webapp you’re trying to create a shortcut for is and chose an icon you want to use and you’re done.  More than that, the “create application shortcut” (my first impulse being a Chrome user) option actually works!  Maybe this is just a result of the updates to Chromium since last I used it, but I kind of suspect not (if they cared that much about that option on Linux, it wouldn’t be a menu item — at least, it shouldn’t be).  This makes me think it has to do with the Ice app that was specifically designed for PeppermintOS and Chromium.

Peppermint is designed for netbooks — which is good, because that’s how I wanted to use my laptop.  It’s built to be a work laptop that I can take with me on the road, so most of the stuff I want will be web-based.  So Peppermint comes with integrated Ice (or Prism, depending on your flavor of Peppermint) shortcuts to web-based applications like Gmail, YouTube, Pixlr (rather than coming with GIMP installed), Seesmic Web (which I replaced with HootSuite), and Google Apps.  It also has a shortcut to Dropbox which — upon a first run — will download and install the Linux Dropbox client to get you synced up with your Dropbox files.  Possibly my favorite part is that there are no bundled obnoxious sounds for everything.  As much as I appreciate the quasi-tribal boot-up sound of Ubuntu, in almost every case for every install of Ubuntu I’ve ever done, the volume is set to deafening, and that sound quickly loses it’s novelty when the volume is cranked up to eleven.  Peppermint — focusing on being a stripped-down, lightweight netbook-style distribution — doesn’t come with any of those sounds.  To the extent that I started wondering if I even had the sound set up at all and, after deciding I didn’t really care if the laptop had sound or not, tried popping a CD in there to finally test and was surprised when it started playing.

The only possible criticism I have is with the built-in music player Guayadeque, which, while it has loads of tools for streaming and playing local media files, has a clunky interface for playing CDs and no real way (that I can see) to drag and drop tracks from the file manager to the music player or create a playlist without clicking on each track from the CD.  That’s not a huge issue for me, particularly since there’s so many web-based options that are already built into the OS like Last.fm and Pandora could be added easily with an Ice shortcut.

Peppermint is my new favorite Linux distribution.  It beats Ubuntu by a longshot with extra credit for being small, not bundling a bunch of crap I don’t want (particularly Rhythmbox, a bloated music player that I’ve never liked — only tolerated because I had to — and generally ignored in favor of some flavor of XMMS), and making the setup and customization processes a snap.  Even though I had to go online to get a driver for the wifi card, that itself was so easy an idiot could figure it out, and once it was installed, I haven’t needed to plug in my ethernet cable (as opposed to Puppy which often dropped a local wifi connection and forced me to reconfigure the thing every time).  Peppermint compliments my style of computing, which is to give me the bare essentials and let me put on my own damn apps, thank you, rather than assuming some software bundle that would be most useful for the average user the way most Linux distributions (and Ubuntu, in particular) do.  I’d also like to give props to the Software Manager, which pulls from a variety of repositories with an easy-to-use-and-navigate interface that makes installing new packages super-easy.

If you have even a casual interest in either Linux or just dumping Windows and trying another operating system, I highly recommend checking out and downloading yourself a copy of Peppermint.