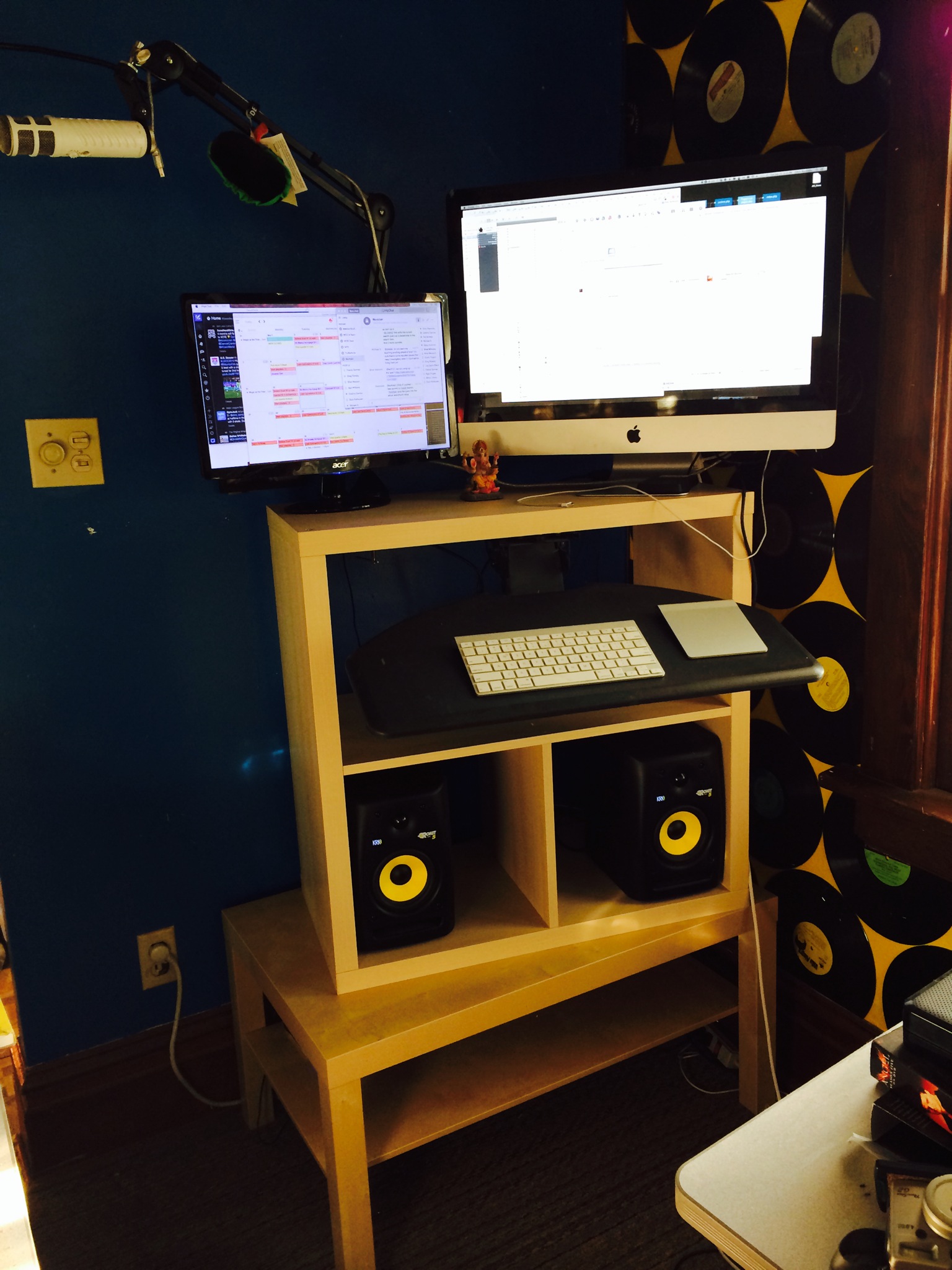 I’ve been interested in having and/or building a standing desk for years. It probably started with this article in Wired. The main reason for not getting one, however, was having invested in a corner desk piece with an extension for the purpose of housing two workstations side-by-side, one for me and one for my wife. We already had something, and I didn’t really want to build something new that wasn’t at least using the thing we had. It was, after all, perfectly functional.

When health and lack of exercise became a concern, I switched from what I still consider to be the best computer chairs in the world (Herman Miller Aerons) to exercise balls with the idea that it could also help my posture. Pro Tip: Exercise balls do not help with your posture. Only you can help your posture by making a choice to stand (or sit) straight. Excercize balls keep you from slouching, it’s true, but I end up hunching forward instead.

Then came all the doomsaying articles about how sitting for 8 hours a day is killing you. And this brought the discussion of a standing desk back onto the table. The only question was how.

I looked at a lot of DIY standing desk setups. I knew I was going to do some kind of IKEA hack, but IKEA has changed their catalogue around since the Expedit was the go-to line for DIY standing desk hacks. We recently redid our living room/TV area with Kallaxes (which seem to have replaced the Expedit), so I decided to go with that. Now, Kallax is either a 4 square by 4 square wall, a 2×2, a 2×4 or a 1×4. In a perfect world, we could do a 2×3.

This, of course, isn’t a perfect world and so we make do with what we’ve got. Even though a 2×2 Kallax is a little narrow for 2 monitors (one of them being a 27″ iMac), the alternative (a 2×4) would have been far too wide for the space we were going to put it in. The base is a Lack coffee table. For the keyboard trays, I just used the ones on the old desk, then didn’t put in the middle divider in the top shelf in the Kallax, snipping off the top of the dowel and hammering the stub back into the hole, then used the existing screws to screw the slider into the top of the Kallax. It sticks out a bit in back, and the tray is just a bit too wide to slide into the Kallax, but you don’t really notice it much.

See how functional it is?

We got two chairs for the standing desk partially for the kids to be able to use the computer and for whenever necessity requires sitting. We got the Franklin bar stool which isn’t hideous but is a tad low for the tray. The whole IKEA trip (2 Kallax, 2 Franklin stools, 2 Lack coffee tables as well as a bunch of miscellaneous stuff we got while we were there) was about $250.

I did a ton of research in terms of heights and proportions and where things should be for optimal ergonomics, then compared all that with IKEA’s online catalog to get an idea of what the possibilities were. The base was really the hardest part to figure out, and we just happened to stumble on a Lack that was the right size when we were in the warehouse. Since I already knew the measurements we just grabbed it and it seems to have worked out pretty well. I considered getting a mount for the monitor(s). Except my Acer secondary monitor doesn’t have mounting brackets, so that’s a no-go. I could mount the iMac (heavy as it is), but I don’t really think I need to. I thought maybe I’d need to have it hanging over the side more so I’d need more space, but with the two monitors at an angle like they are, it seems to work out with the space i have.

I’m now into day 2 of actually using the standing desk. I find that I move around more (which, you know, is good for someone who doesn’t move around much because they are coding all day), especially if there’s danceable music playing. My legs and feet are sore, of course, but that’s to be expected and it’s not anything untolerable. I also expect that, as I get more used to the new setup, my body will be more accustomed to standing and I won’t be as sore at the end of the day. It’s certainly better (for my health, if nothing else) to end the day sore from standing than to end the day stiff and unable to move from sitting.

The other bonus (and the reason why we did the Kallax + Lack for these two desks) is the extra storage space. All the crap that was just randomly all over the desk was either thrown away, put into storage, or found a home (with room to spare). I might end up getting monitor stands at some point for the two KRK monitor speakers currently under the keyboard tray but for now, this works. The boom for my microphone is mounted to the back of the Kallax and comes down over the second monitor when I need to use it, and I think it actually ends up being positioned better than the way it was before when it was coming from the side of the desk. I can’t tell you how much I love that boom. It’s all kinds of perfect.