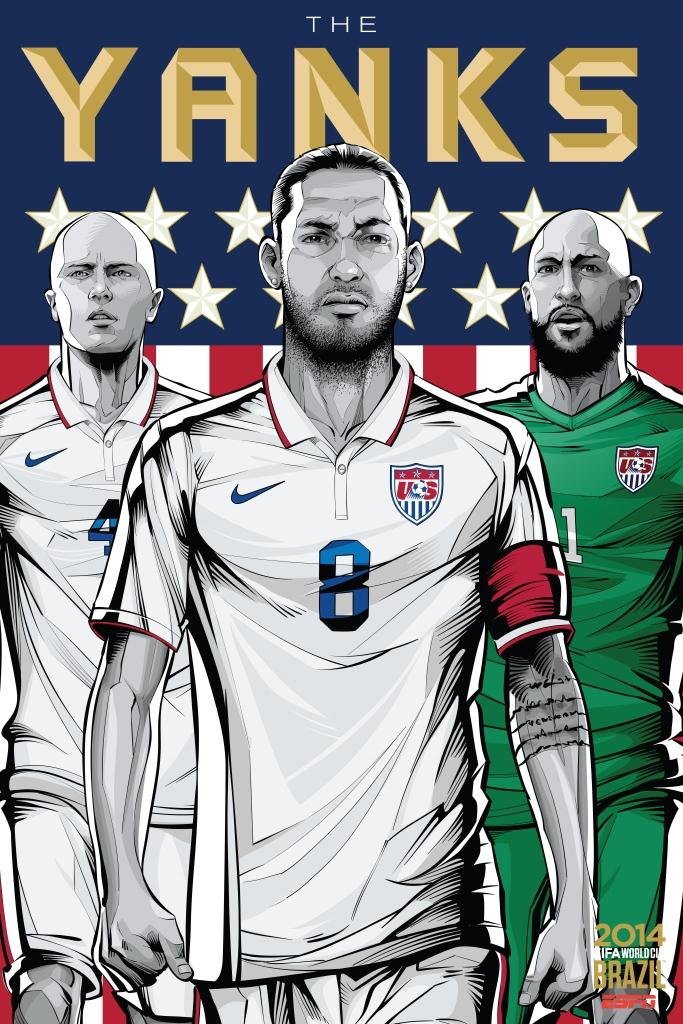 I know a lot of people who couldn’t care less about the World Cup. Some of them watch other sports. Some avoid all sports. I’ve had a few direct conversations with a couple of them, but I decided to share why I care and why I’m watching.

The thing is, I was right there, too. I used to watch and play sports as a kid. The normal sports — baseball, basketball and, though I wasn’t big enough to actually play, football — made regular appearances in our household. I collected trading cards, went to card shows, got autographs, the whole nine yards. I celebrated touchdowns during the 49ers’ reign during the 80s and 90s at Super Bowl parties, I dutifully marked double-plays and fly-outs in box scores at Giants games.

Then there was the baseball strike. While I spent my time not watching my favorite players playing on the field, I instead had the same recurring thought: These guys make how much money and they are asking for more? The distance between the stars on the field and me and anything I could ever hope to attain was so vast that I completely lost interest in the game. And not just baseball, but all sports. These guys get payed for playing a game, I thought, while everyone else gets a fraction of what they make to do something they hate.

While I still liked playing sports (and sports games), the passion for the game and the players was gone.

It took a single game

After moving to SLC, I went to a few Bees games, but since soccer was never on my radar, when Real Salt Lake started playing at the University of Utah, all I really knew about it was the hordes of fans clogging downtown streets and public transportation to make it to the games. It wasn’t until 2 years ago that we finally went to a soccer game — a five-nil defeat against the San Jose Earthquakes — but that’s all it took.

It wasn’t just the game. Had I watched the game on TV, I probably wouldn’t have been as sucked in. The first thought I had when we got to our seats was how close we were to the pitch — in baseball, even when you’re right in the front row, you’re still quite a way away from the action (and action in baseball tends to be pretty rare). I’d never been closer than the upper decks at other sporting events, but the stadium was small (comparatively, Rio Tinto seats just under 20,000) and the seats felt close to the players. Rather than specks on a field of green, they were right there — I could see the expressions on their faces. The next thing that struck me was just how many people were there supporting their team in full regalia — people like me, who weren’t wearing RSL-related gear — were a distinct minority. The enthusiasm for their team was a palpable thing you felt just looking around the concourse. But when the game started with the first kick-off, all those things faded into the background.

Real Salt Lake is one of the only American soccer teams that has its own, original anthem — written by Brandon Steineckert (drummer for Rancid). There are chants and songs for other teams, but most of them are appropriated from other places — for example, Sporting KC have an “EVERYBODY” chant that is based on the chorus of LMFAO’s “Shots”. RSL fans sing the “Believe” anthem at the opening kickoff and after every goal and with the entire stadium singing, waving scarves and flags, stomping and pounding drums, the effect is stunning. I’ve been to a lot of sporting events for different teams, different sports. There isn’t anything like the excitement felt at a soccer game.

As I learned more about the club and the sport, I learned that RSL has a specific desire to sign players based on their personality type. They are team-first and their motto is The Team is the Star as opposed to other teams who make big name signings for millions of dollars. It reminded me of the Bill Walsh days of the 49ers, when they built a dynasty out of players who may not have been the flashiest, but when they came together as a team, could do amazing things.

And then there’s the soccer in America thing. Everywhere else in the world, soccer is there. All you need is a ball and feet, so it’s played in the streets and on pristine fields. Here, it’s still almost an underground movement, dwarfed by baseball and American football. It shouldn’t be surprising, then, that soccer appeals to alternative and punk kids.

And of course, that makes me feel a lot more at home. More than that, though, one of the biggest demographics for the sport in America — besides people of latino descent — are people between 18 and 29. Maybe that’s for the same reasons I came to soccer — because I was disgusted by the other sports — or maybe that’s because these are people who played soccer as kids or maybe it’s both. Whatever the case, I find it fascinating that soccer draws a younger, hipper crowd than the “big three” sports in America.

Having never paid attention to soccer before 2012, this World Cup thing is new to me. Seeing players from the team I support get called up to the national team and ultimately set to play in Brazil is exciting. It’s also the first time I’ve seen (or will see) these European players (like Messi and Ronaldo and Neymar) that everyone talks about actually play outside of a doctored highlight reel on YouTube.

I’ve never been particularly patriotic. But it’s hard for me to watch videos like these and not feel a swell of national pride:

People think soccer is boring, but I think games where there is one team with a distinct advantage or favorite playing another team with very little chance of winning is boring. In soccer, the entire landscape of the game can change in an instant — a vital save, a quick corner kick, an unexpected (and dubious) penalty. I’ve learned that anything can happen in a soccer game, and that’s what makes watching it so exciting.

Soccer has won me over. I challenge you to give it a chance to let it win you over, too.