Trigger warning: This post talks a lot about the sexual assault that happens, frequently, on Game of Thrones. If these topics are personally distressing to you, please don’t read this post. TL:DR; What happens to Sansa is horrible no matter who it happens to.

This is my first post ever about Game of Thrones and it’s a biggie. A lot has been said about the treatment of Sansa Stark in Game of Thrones, Season 5 – Episode Six. Spoiler Alert! She’s raped by her new husband, Ramsay Stark on her wedding night.

There’s been a lot of uproar to the tune of “how could you do this to Sansa when this never happens in the books?” I haven’t read the books. I’m one of those. It’s gotten so bad that the author, after being inundated with outcries and “are you okay with this?” basically said “dude, the TV show is different than the books. Deal with it.”

My understanding is that, while in the books Ramsay might not rape Sansa, he does rape some other girl who doesn’t have a main role in the story. This leaves me uncomfortable about this particular uproar. Because if your issue is with the fact that Ramsay rapes Sansa, then there’s a problem.

Rape is horrendous no matter who it happens to. Whether it happens to a main character and not a forgettable side character in a fictional story shouldn’t matter. The only thing that matters is your proximity to the action. But just because you can’t see it — but you know it’s there — doesn’t make it any less bad. And it’s not like this was unexpected. From the minute you know that Sansa and Ramsay are intended to marry, you know something like this is going to happen. Ramsay doesn’t go from being a sociopath to a guy you want to take home to meet the fam (all of whom are dead, by the way, in the case of Sansa). We see this established in the previous episode in his treatment of Myranda. Let there be no mistake, Myranda is also raped. Just because she allows herself to be raped does not make it any less rape. There’s a lot of fucking rape in this show, that’s been established since the first season. More than anything else, it’s the one thing that makes it difficult for me to continue watching the series. Ramsay hasn’t somehow redeemed himself and found true love in a virginal Sansa Stark. He’s found power, acceptance from his father, and a new toy to fuck with.

Ramsay’s entire character is trying to be as fucked up as his daddy, Roose, and possibly to one-up him on fucked-up-ness. If we needed a reminder, we’re given one when Roose tells the story of how he raped Ramsay’s mother. Upon proving how fucked-up he can be, Ramsay is rewarded with nobility — the acknowledgement of his family name despite being a bastard. His fiendishness is encouraged and rewarded by his environment which is what makes him one of the most loathsome characters in the show. Any trace of humanity is stripped from him. He is the monster that lives in your closet.

Game of Thrones‘ entire premise is to undermine your expectations as a viewer and a reader. George RR Martin wants to fuck with you. He gives you characters that you love and then he kills them to prove that nothing is sacred, everything dies. He gives you characters that you hate, and you grow to love them as there characters evolve and change (Tyrion), or else he punishes you for hating those characters by performing atrocity upon atrocity on them (Sansa). I think he sits in his room in the dark and just cackles with glee every time he finds a new and horrible way to annihilate some character that’s a fan favorite.

Sansa Stark is a great example of this. She starts out as a prissy, stuck up little girl dreaming of a fantasy life where she is married to a beautiful prince who loves her and is good to her. Over the course of five seasons, we’ve seen this dream smashed and smashed again like that animated gif of the stick figure person typing at, and later bashing the computer keyboard until all that’s left is a bloody stump. That’s what’s happened to Sansa’s dreams. As viewers/readers, we expect that, at some point, we will be rewarded with our persistence with some tale of redemption. It’s only after we’ve lost everything that we’re free to do anything — so says Tyler Durden. But in Game of Thrones, that redemption is often undermined, if not outright sabotaged. When Sansa and Littlefinger talk about marrying Roose Bolton’s former bastard, there’s a hint that maybe there will be some revenge action happening to the Bolton’s after the wedding. But there’s never any guarantee that Sansa will find redemption for all her suffering, nor us, as viewers for hating Sansa in the first season and being punished for judging her harshly.

Personally, my problem is not that there is rape — because five seasons in, if you don’t accept that on some level it’s going to happen, you’re deluding yourself — it’s that we have to see and experience every last horrible minute of it. That entire scene could have just been zoomed into Theon, watching from the door. It could have been implied some other way. I don’t know why other people watch television, but I watch it for fantasy. To escape the horrors that happen every day, all over the world.

Somewhere in America, a woman is raped every 2 minutes. 22% of victims were younger than age 12 when they were first raped, and 32% were between the ages of 12 and 17. 25% of girls and 17% of boys are sexually abused before the age of 18. 70% of rape and sexual assault victims know their attacker prior to the assault.

That came directly from a Google search result for “how often women in america are raped”. That was not a resultant page, that was the search result. 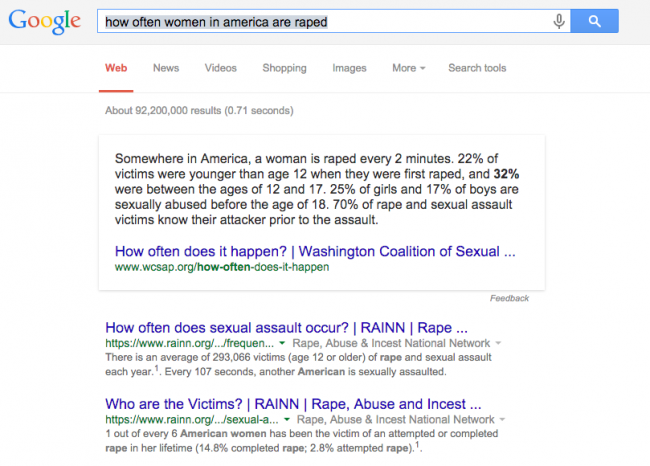 You know what’s not a reason I watch television? To be reminded of shit like this. The world is already a horrifying place sometimes and watching that horror is not entertaining; I watch television and movies and read books and play video games to be entertained. True Blood was a pile of donkey shit sometimes and the first season was painful to watch. But at least at a certain point it figured out how to be entertaining.

Movies and television are all about manipulation; they manipulate you into feeling the emotions they want you to feel. They do this through a combination of dialogue, visuals and mood-setting elements like the score, color temperature, set decoration, costumes, etc.  But what they are doing is manipulating your emotions, playing you like an instrument. And we allow them to do this, because in the end, they will take us to a place of self-awareness, of joy, of understanding, of feeling recognized and understood. When they don’t, they leave us hanging, and this often is fodder for a continuing story, this sense of unfinished business. And with a tale as epic and grand and far-reaching and multifaceted as Game of Thrones, that’s what keeps us watching.

And then I’m reminded, yet again, that nothing is sacred in Game of Thrones, that everything will be dragged into shit and there is no happy ending, only slightly less barbaric ones.

Sansa is one of the characters in Game of Thrones that I couldn’t care less about, personally. But I’ve been too intensely close to rape in my actual life to ever want to watch it play out in something I do for entertainment and enjoyment. That’s enjoyable to absolutely no one. It doesn’t matter if the victim du jour is Sansa Stark or one of the other nameless females Ramsay has tormented before. It doesn’t matter. It’s not entertainment. It’s a form of torture.

If you or someone you know has been a victim of sexual assault, talk to someone, particularly someone skilled with tools for helping people cope, like RAINN.