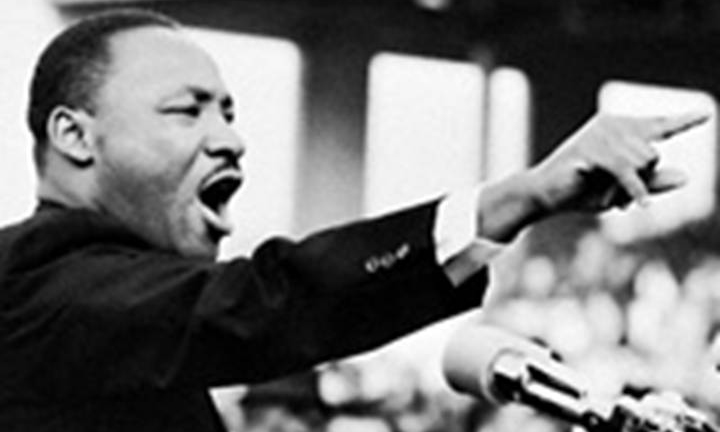 I’m not the type of person who likes to commemorate or memorialize the occasion of a day like Martin Luther King, Jr. Day.  For the most part, my observation of any holiday is whether I choose to take the day off and (at least since my son’s been in school) influenced by whether G has the day off.  Today he does.  I still plan on working.  However, this MLK quote was posted to Gizmodo the other day, and I found it poignant:

Yet, in spite of these spectacular strides in science and technology, and still unlimited ones to come, something basic is missing. There is a sort of poverty of the spirit which stands in glaring contrast to our scientific and technological abundance. The richer we have become materially, the poorer we have become morally and spiritually. We have learned to fly the air like birds and swim the sea like fish, but we have not learned the simple art of living together as brothers.

This is the serious predicament, the deep and haunting problem confronting modern man. If we are to survive today, our moral and spiritual “lag” must be eliminated. Enlarged material powers spell enlarged peril if there is not proportionate growth of the soul. When the “without” of man’s nature subjugates the “within”, dark storm clouds begin to form in the world.

I’m not a religious person in the normal sense of the word.  But I’m always captivated by the passion, intensity and clarity in the words of African-American ministers and public speakers.  I’ve built blogs for a few and those were no exception.  They stand in stark contrast to my more conservative, traditional, tedious and boring Catholic upbringing.

This is something E and I talk about often; the idea that the more we, as a culture, become immersed and dependent upon technology, the more we lose a part of ourselves.  I’m willing to accept the digital replacements — however inferior they may be to their physical counterparts — for the things we interact with and love.  Books, records, tangible things that you can hold and experience and interact with in a primal way.  The idea that in 10 or 20 or 50 years every piece of media and information will be digitally encoded makes her blood run cold.  And I think MLK gets to the heart of the matter in the excerpt that Giz found; as we revel in our own mastery of technology and science, we lose the mystery and the magic of those things that science and technology has no bearing on, and, in turn, lose a piece of our soul.  The latest Kindle may be the best thing for reading books since reading books, but who can deny the joy of holding a book, feeling the tangible weight, maybe sneaking a peek at where your bookmark is in relation to the front and back covers.  As we move to a digital world, album covers — once large and beautiful, able to display a great amount of detail — grow smaller and smaller until they’re nothing more than 128 pixels square on an iPod or Zune.  I used to love to run my fingers across the spines of my dad’s record collection, pull one out, open it up, and stare at the inside art and read the lyrics.  That’s something you can’t do with iTunes, ignoring the loss of fidelity between actual lossless, mastered audio and encoded mp3s.  As we put on our 3D glasses and immerse ourselves in “the experience”, we lose the real experience of being in a theatre with a 30 foot high screen.

No, I don’t think MLK is talking about our media consumption, that’s just my angle on it.  Because I’m not going to get into a theological discussion about the state of our spiritual beings as a society — although I think he’s right about that, too.  I’m not sure where we stand with our moral being, although with the shootings in Arizona, the rise of conservative extremism over reasonable discourse and scientific fact (see: anyone who says the greenhouse effect is a hoax), and MLK’s own demise…well, there’s probably enough evidence there to support that, as well.

Cloudy With a Chance of Gigantic Penis:


something about a large, phallic storm front is just adolescently hilarious.  especially when he starts stroking it.

How Many USB Ports Does It Take To Cook Meat? 30.:

An imaginative computer user wanted to try cooking with USB ports. Using a USB-powered cup warmer, he soldered in the power of 30 USB ports and transformed it into a portable stove. Not kidding, the meat cooked perfectly. How the Leaning Tower of Pisa Was Really Made

awesome.  another reason i love gizmodo.