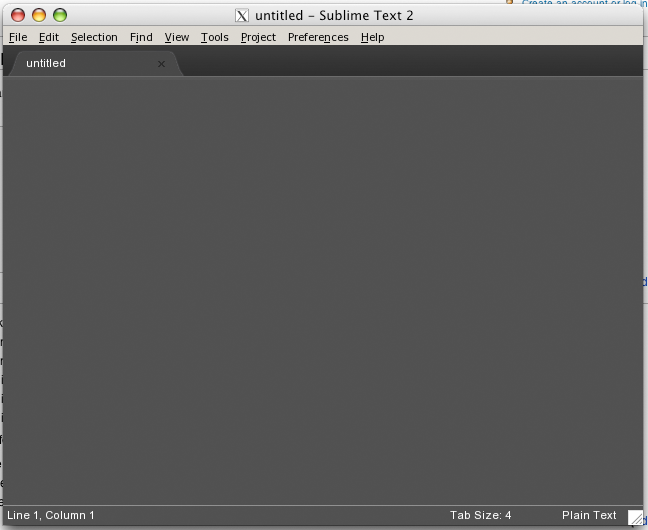 Because I can never leave well enough alone, I installed a copy of OSX 10.5.7 on my Dell Latitude D531 via a copy of iATKOS v7 I had lying around.  Why Leopard and not Snow Leopard or Lion?  Well, first of all, by the time I got a couple moderately successful installs of Leopard (enough that I knew how to reproduce it), I was pretty satisfied to leave well enough alone, but also I wasn’t sure the Dell laptop could handle the newer software.  In going through and setting up software to make this a functional work machine, I realized that my IDE of choice SublimeText wouldn’t run natively on 10.5.  This had to be remedied.  SublimeText, as I’ve discussed before, is the best development environment (and possibly the best text editor, in general) there is, and I would not accept a lesser editor after embracing Sublime so fully.  And anyway, a solution was readily available.

First, download Wine Bottler.  Wine Bottler is an app that bundles Wine for OSX and will take care of setting up your Wine configuration so you don’t need to worry about it.  But, more than that, it allows you to create .app shortcuts that can then be redistributed (if you so desired) or installed into your Applications folder like a regular app.  (This is one of the annoying parts of using Wine — it installs in it’s own little isolated environment, which makes creating shortcuts that you actually can, you know, use, tedious and occasionally problematic.)  Wine Bottler will even bundle Wine into your .app file, so if you were going to redistribute the app, your users wouldn’t need to have Wine installed themselves.

Once Wine Bottler and Wine are installed (both are in the download bundle from the Wine Bottler page), you can download the Windows version of SublimeText.  I chose the 32-bit version because I didn’t really trust my laptop nor Wine to be able to handle the 64-bit architecture, even though the Dell has a 64-bit processor.  I didn’t want to try to push my luck.  (Note, this process could probably be applied to most other simple Windows apps.  I say “simple” because, although Wine 1.0 officially marks the milestone where Windows apps can actually be run natively within a Wine wrapper, there are still bugs with a lot of programs and it generally has to do with the complexity of the program  you’re trying to run (games, graphic applications like Photoshop, anything that involves rendering video might be a bit much to expect Wine to handle well — I tried running DVDShrink under  Wine and it failed miserably).)

Double-clicking the SublimeText installer opened Wine Bottler automatically, and I was asked for some information about the app.  First it wanted to know if I should just run it as a Wine file or if I wanted to create an OSX application with WineBottler.  I chose the second, then immediately regretted it because I was running an install file — would the shortcut created be a shortcut to the installer?  Answer: no — the install ran through fine and at the end I was given a choice to pick the path (in the Wine /Program Files directory) for the app I wanted to create a shortcut for and where the .app file should go (I chose Documents then later moved it to Applications).

Once Wine Bottler creates the shortcut, Sublime runs more or less the way you’d expect it to after a loading window pops up saying it’s preparing the file.  If you’re used to hitting the command key for everything, you’ll have to switch your thinking to using the control key (command+c vs. ctrl+c to copy, etc.), but otherwise it works the same as the native equivalents.

Now, because this is vitally important, there is one last thing that must be done to fulling bring the SublimeText experience to OSX 10.5.x and that is the application shortcut icon.  I had a few, high resolution SublimeText png icons I had downloaded for my ObjectDock on my Windows machine that I found from the SublimeText forums in a Google search, but being a relatively new Mac user, I had to Google to figure out how to use those pngs as the icon for SublimeText to replace the generic app icon it was given automatically.  This is actually fairly ridiculously easy:

Open the png file in Preview, hit command+a to select all, then command+c to copy it.  Then go over to your Applications folder and either right-click and do More Info for the SublimeText shortcut or use command+i to open the application info screen.  Click on the small icon at the top left of the window (I was misled by the large icon at the bottom — don’t try to use that) so it is highlighted, then do command+v to paste your icon in and, voila new application shortcut icon.  Now you can drag this to your doc and it looks and acts like a regular, native version of SublimeText.

Again, this process could be used for other apps, too, but, since it’s Wine, your mileage may vary depending on the app.  Hopefully this was useful to someone other than me, let me know in the comments if you found this helpful.

i discovered/created a fondue recipe that i think is kind of awesome and offbeat.  the (possible) problem with it is that it’s pink.  sort of mauve actually.

traditionally, fondue has 2 – 3 cheeses: gruyere and emmentaler are pretty standard.   you can also use appenzeller or raclette (swiss, not french, although french would do in a pinch if you needed to) or even jarlsberg if the stinky feet cheeses are getting to you.  also traditionally, those of us even remotely lactose-sensitive are going to be bent double after eating a large enough portion (say, half a fondue-pot full).

the other thing is that, while fondue typically calls for a dry white wine, a good, bold red (like a pinot noir or cabernet of syrah) pairs better with with the sort of aged cheeses used in fondue (or so says my wine and cheese book).  i’ve decided the white is strictly for aesthetics.

my first foray into throwing the rules out the window was for Valentine’s day, for which pink fondue could be considered somewhat thematically appropriate.  that wasn’t the goal, of course — the idea was just to make a goat fondue (goat milk is easier to digest than cow milk and has been found to not cause the symptoms of lactose intolerance) and pair it with a wine that both went better with the cheese (the same wines that pair well with gruyere and emmentaler also pair well with goat cheeses, especially aged goat cheeses) and that we both liked better (we prefer reds to whites any day).

thus began the first experiment.  for this, i got cypress grove lamb chopper and a mahon reserva.  my first choice to go with the lamb chopper was cypress grove’s midnight moon, but that was unavailable pretty much everywhere (my theory is that the goats were “kidding” — a time of year when goat dairies do not produce as much milk because the goats are giving birth to and nursing their kids, something i learned when i was working in grocery).  i had forgotten (until i got home) that mahon, unlike a lot of other spanish cheeses, was cow milk, not goat or sheep.

the result was really good.  the cheese didn’t melt as smooth as fondue usually does, which i’m guessing was because the aged mahon was pretty dry and goat cheese, in general, has a less smooth texture than cow cheese.  we used a smoking loon pinot noir and, aside from the pinkness, it was really good.

so last night i thought we’d go for an encore, and last night’s ended up being even better.  so here’s the recipe, more or less:

my recipe says to get a clove of garlic and rub it on the inside of the fondue pot.  well, i didn’t have a single clove of garlic lying around, so i got some crushed garlic and scooped some with a spoon and rubbed it onto the pot with my fingers.  the result was garlic-y but tasty (if you like garlic).

next, mix the wine and the lemon juice and heat on medium until bubbly.  pour yourself a glass.  turn the heat down to low and stir in the cheese.  mix the corn starch with 1 Tbsp more wine.  the original recipe says kirsch, but the idea of cherry liqueur sends e running for the hills.  pour corn starch/wine mixture into the fondue.  stir regularly.  drink profusely.  add pepper and nutmeg to taste (original recipe called for white pepper but using black pepper didn’t seem to hurt anything).

serves two with room for dessert

the manchego melted a lot better and fit the goat theme.  the fondue still doesn’t have the same elasticity that you get with the traditional cow’s milk cheeses, but that’s goat cheese for you.  i’m still holding out to try this with midnight moon, an aged goat gouda, but that will most likely have to wait until next time.

i have this philosophy about fondue that you can’t really screw it up.  some cheese melts better than others, and some pair better than others, but cheese is pretty much cheese, and if you have a few cheeses you like, why not throw them together in a pot and melt it?  if you like cheese and you like fondue, you’ll probably like what comes out regardless of if it’s by the book.  for this reason, i think that fondue is the ultimate anything goes gourmet food; you don’t need to be an iron chef, you just need to like cheese.