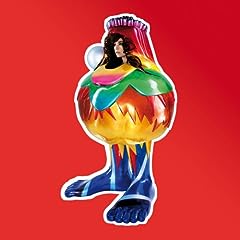 it’s been growing on me, but it’s still not as listenable as i hoped.

for me, bjork peaked around homogenic/selmasongs. there were two more albums (vespertine and medulla) which were pretty good, but not bjork’s best. then she did the soundtrack to drawing restraint. now i never saw the movie, and i’ve read that that makes a huge difference. however, listening to that is at times an experiment in self-flagellation.

volta has a lot of the same elements as drawing restraint, namely in weird, dissonant horn noises and no apparent time structure. i’m down with experimental music, but i also acknowledge that it’s not always pleasant to listen to, and bjork is (or was) a techno musician, so i sort of anticipate my bjork to, you know, have a beat.

that said, “earth intruders,” “innocence,” “hope” and “declare independence” are all really good, danceable songs. like bjork herself, this album just takes a few listens to really appreciate.