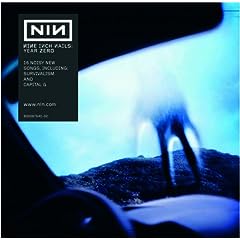 i was frustrated by not getting this, like, the day after i ordered it from the lala store powered by newbury comics. however, i’ve been listening to it a lot since it did arrive, and i haven’t gotten tired of it yet. could be it’s because i still like nin, even after all these years. could be it’s because the last several albums (with the possible exception of with teeth which didn’t have a whole lot of new territory to offer) have changed and developed and ever-evolving sound. since the downward spiral, nine inch nails and trent have seemed to be challenging themselves to create something new for each subsequent release.

for year zero, rather than a traditional marketing campaign, trent opted for building an ARG (alternate reality game), which i think i’ve mentioned earlier. done with 42 entertainment, which has done several large-scale ARGs now, year zero is simply a part of a grander story of a post-apocalyptic future on the verge of self-destruction. lots of sci-fi dystopian cliches and themes can be found, but the scale is huge. there are clues that have been left inside songs, on usb drives that were left in bathroom stalls at concerts, irl meetings, and approximately 30 unique web sites that have been sent to the present day from the world of year zero. i’m not going to get into the story because it’s a grand task, and most of the details are better found on the ninwiki.

the world building really does increase the appeal of the album, i think, because it puts the songs and the themes in a context. and it’s hard not to appreciate the amount of work done in that regard. the album itself, however, is excellent. several reviews have said this album is “noisier” or more “industrial” than previous albums, and that certainly applies. there are occasions where it almost sounds like aphex twin, or his remixes on things falling apart (which is to say, very noisy with weird computer sounds). tracks like “survivalism,” “capital g,” “me, i’m not,” and “god given” have been stuck in my head for weeks. year zero has everything that made the downward spiral groundbreaking, and the fragile addictive. in addition, it’s got the best tweaks and quirks off his multitudinous remix albums and eps. i can’t wait to see what the actual remix album is like.

enough talking, this album rocks.
next up, bjork – volta.