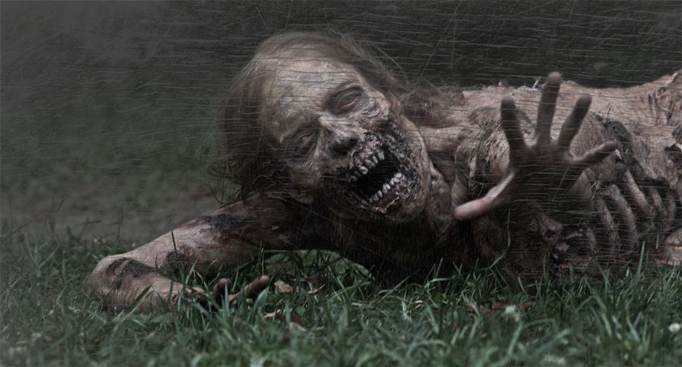 After much hype and to-do, I decided to give AMC’s new zombie show, The Walking Dead, a go.  54 minutes into the 1 hour & 6 and I was already bored to death of the headshots, raspy whispers and groaning, and the “ohmygod the last bastion of hope is actually full of zombies but no one knows!!!”

Dude.  I like horror.  I watched the Nightmare on Elm Street series when I was in early elementary school.  But what is it about zombies?  I mean, seriously.  Here’s a synopsis of every fucking zombie story ever:

– You wake up from a coma
– Everyone is dead
– There are zombies
– Also, there are a few survivors who know wtf is going on
– There’s some place that is supposed to be safe from zombies
– It isn’t

I figured that, you know, you’re going to run a TV show about zombies, there has to be more to it than that, right?  Some kind of new twist?  How the hell are you going to run an entire 13 episode series on the premise of “everyone’s dead, some of the dead are zombies and they want to eat you.”  At least in 28 Days Later there was the whole “humanity is worse than the zombies, maybe we deserved this” thing going on – morbid and makes you want to slit your wrists, but at least it’s something else.  And it suddenly occurred to me that the thing about Cherie Priest’s zombie steampunk book Boneshaker (a freaking awesome book, btw) that was awesome, wasn’t the zombies.

So, then I think, wtf?  Why are zombies so popular?  They aren’t sexy like vampires.  They don’t have the whole Jekyll/Hyde thing like werewolves – a metaphor for angsty men who need some kind of justification for not being able to control their anger.  They’re just dead people.  Who aren’t.  The whole zombie meme came out of – oops! – accidentally burying people alive (usually said people had some sort of disease which gave them the semblance of death, like a coma, until you buried them and they woke up in a coffin and tried to claw their way out.  This also may have had a bit to do with the whole superstition that graveyards are haunted).  Zombies are like the least interesting horror creation, ever.  Are they trying to play on our fear of our own mortality?  Because I’m totally freaked out that I’m going to die and come back as some undead version of myself intent on eating my progeny’s flesh.  Yep.  I don’t know.  I don’t get it.  Zombies suck.