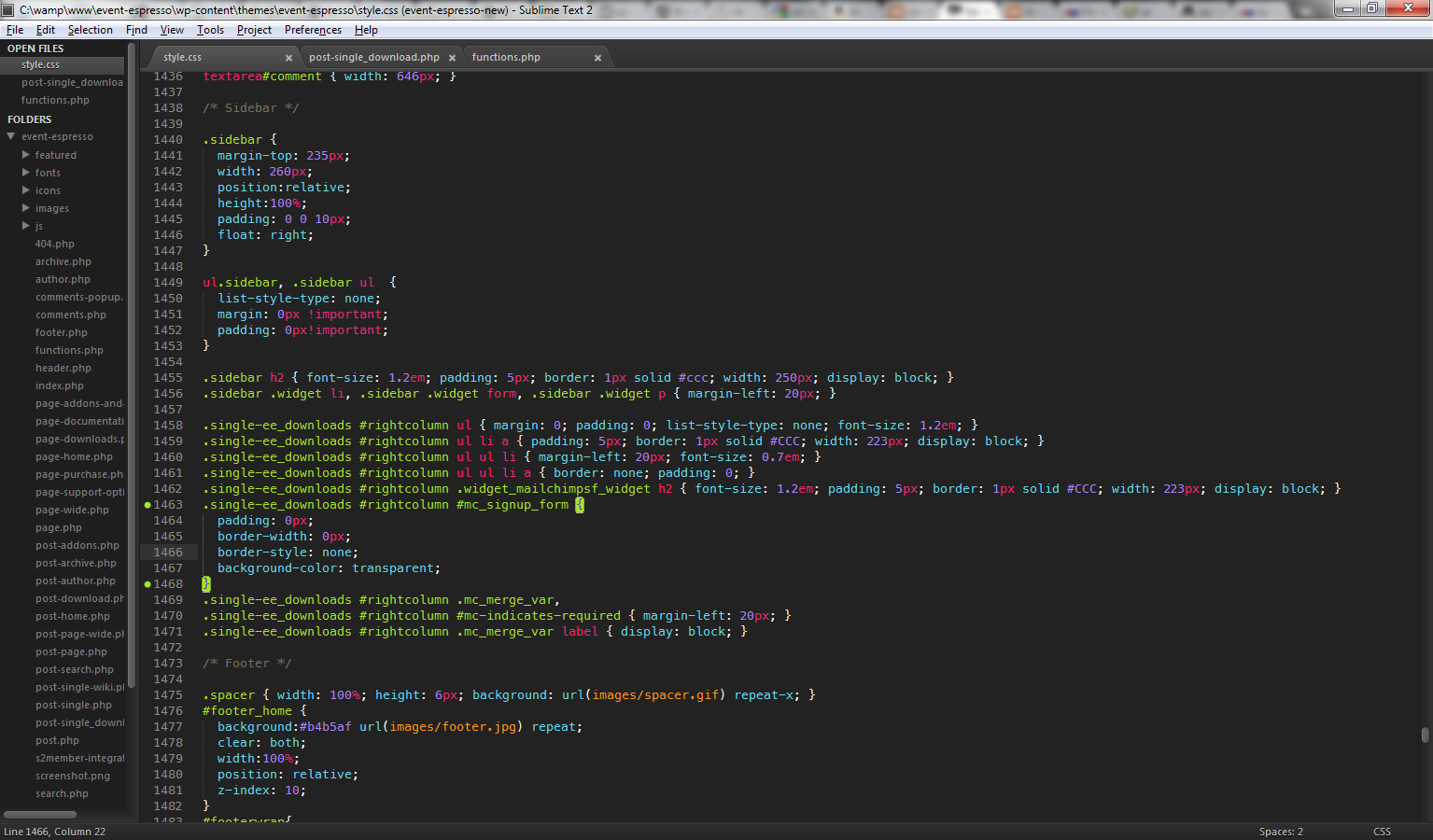 I’m not one to gush about text editors. Pretty much they do their job and that’s about it. I respect the amount of work that goes into something like, say, OpenOffice.org Writer, but I wouldn’t say I’m in love with any particular aspect of it (except, perhaps, that it’s free — as in beer — and open source). My main reason for switching from Dreamweaver to Notepad++ was economical, but also to get away from the code that Dreamweaver liked to automatically insert into documents. For the most part, I was only using the source editor anyway, so it seemed a waste to use an application with a graphical editor that I never used and Notepad++ filled the gap nicely.

About a week ago, I found SublimeText 2. After using it exclusively for my web development projects for this past week, I can tell you I am never going back to anything else. Here are a few reasons why:


Okay, so it’s pretty superficial of me to put aesthetics above everything else, but try and tell me that you aren’t like me and the first thing you do when you open a new program that has any kind of customization abilities isn’t find the perfect theme that works for you. SublimeText comes with 22 different color schemes and each one can be hacked if you so desire. You can download new color schemes. You can use any font installed on your system by adding a line to a configuration file (easily accessible through the Preferences menu). And thanks to a package (we’ll get to packages in a minute) called Soda, the entire UI can be customized in a smooth light or dark scheme (without Soda, the sidebar is not customizable).

You can extend the functionality of SublimeText through packages. Each package is based on a GitHub or Bitbase repository and repositories are checked for updates everytime the application is loaded. Functionality enhancements include things like bracket highlighting, PHPdoc capabilities, autofilling, support for various languages like javascript and HTML5, you get the picture. With PackageControl (which can be installed via an internal console just by copying and pasting the command in the readme file on the GitHub repo — pictured right), you can easily install new packages into Sublime without having to worry about where they need to be saved — everything is handled automagically.
[clear]

When I was using Notepad++ and Dreamweaver, my window usually opened with approximately 8,000 tabs for various projects in different states of being worked-on. Navigating between them usually involved using the arrow buttons to scroll through to the beginning or to get a list of the open tabs via the Window menu. More often than not, I would try to open a file only to find that it was already open, hidden somewhere behind tab number 6.753. In Sublime, you can create discrete “projects” by adding a directory (or multiple directories) to a project. This could be a WordPress theme, an entire website, a bunch of related plugins you’re working on, or any other variation (pretty much just listing the sorts of things I use this for). Rather than having every file for every project you are actively working on open in a unique tab, you can easily switch between projects and have the last-opened tabs in that project there for you when you go back to it. Meanwhile, the directories (and files therein) that make up your project are listed in the sidebar, making it easy to open any file in that project. Not only that, but single-clicking on any file will open a “preview” of that file without actually opening the file. Meaning if you just wanted to look at something but not change anything, you don’t need to open the file and then close it, you can just click on it to check it out and then go back to what you were doing. Now that I use projects, anything I was doing before just seems clunky and unsophisticated.
[clear]

Don’t you hate it when you are using a “Freemium” or “Shareware” app and it does everything you need it to do except one tiny little thing that makes it completely useless without actually purchasing it? Like saving, for example? One of the things that instantly earned my respect was that installing SublimeText 2 let me do everything I needed to do without purchasing. After a certain number of saves, a pop up would appear asking me if I wanted to purchase, which could be easily clicked away and I was back doing whatever I had been doing. Some genius thought that programmers might be more interested in getting work done and that, after seeing just how good Sublime is at assisting them in that very task, they would be more inclined to pay for something they had been using for free.

Well, that genius was right. Despite the fact that I could have gone on indefinitely without paying the $59 for a single user license and just gotten an occasional notice to buy, I chose to actually purchase the application because it’s so damn good at what it does. I haven’t regretted that decision. The guys who make Sublime, well, sublime deserve to benefit from what they have created, which is an elegant IDE that is forward-thinking and extensible without a lot of bloat. Just hours after I installed a bunch of packages, I was already using most of them and felt the coding process suddenly become fun again.

One Reply to “SublimeText — I think I’m in love”