Since I get a kick out of digging into the history of such things (like I did for Valentine’s Day a couple of years ago), and since I — being a recovering goth, former Catholic, and damn heretic — know a few things on the subject, I thought it would be fun to look at the history of today, the day we call Halloween. 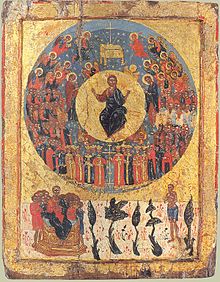 First, the name. “Halloween” is a bastardization of Hallowe’en which was a bastardization of All Hallows Eve. Tomorrow, as you must obviously know is All Hallows Day, or as it’s more commonly known, All Saints Day. All Saints Day is the day that we, as Catholics (you’re all Catholic, right?), celebrate those who have died and have “attained the beatific vision of heaven” [1]. All Saints Day, of course, comes before All Souls Day, which is when we pray for those who have died but not achieved the beatific vision of heaven. So, All Hallows Eve is the night before all that praying and stuff.

Oddly enough (or, not-so-oddly if you, like me, are aware of how such things work historically), Halloween coincides with a pagan celebration known as Samhain (typically pronounced sah-win, which, I might add, is not just a post-Misfits, Glenn Danzig metal band). The word Samhain comes from Old Irish for “summer’s end” and is the first of four quarterly feast celebrations that centered around the changing of the seasons.

Traditionally, Samhain marked the end of the harvest and the preparation for the long, dark and cold days ahead leading into winter. It’s also one of two days of the year (the other being Beltane, the spring festival which, strangely (I’m being ironic here), coincides with Easter) in which the “door to the Otherworld” [2] opens and fairies and the dead come out and do stuff, like talk to people. This isn’t always a good thing, because there are good fairies and bad fairies and there are good dead people (like late Uncle Joe) and bad dead people (like mass-murdering psychopaths). With these good and bad dead people and fairies roaming around, things can get pretty crazy. We want to celebrate the good people and fairies, so we invite them to dinner by setting a place for our deceased loved ones [3], but we also don’t want to let the bad guys in, either. People would do things like turn their clothes inside-out if they had to go out after dark, carry salt to ward off the fairies, or put food out as offerings at the door.

Turnip lanterns — sometimes with faces carved into them — would be placed outside of homes for a variety of reasons. They can light your way at night (good, so you don’t get snuck up on by evil spirits…because evil spirits are totally afraid of light), they represent the “spirits and otherworldly beings” [3] that happen to be roaming around, and they might also protect your home from bad spirits and otherworldly beings. Because you don’t want to invite a mass-murdering psychopath to dinner, just Uncle Joe.

Wearing costumes was common at Celtic feast days, but especially on days when the spirits were said to be roaming about, and could have served to confuse, ward off, represent these spirits, or possibly some combination of the three. Additionally, Wikipedia has this to say which is much more interesting than I could paraphrase:

In Ireland, costumes were sometimes worn by those who went about before nightfall collecting for a Samhain feast. On Samhain in parts of southern Ireland during the 19th century there was a Láir Bhán (white mare) procession. Someone covered in a white sheet and carrying a decorated horse skull (representing the Láir Bhán) would lead a group of youths, blowing on cow horns, from house to house. At each, they recited verses and those inside were expected to donate food and other gifts. The greater the donation, the greater the blessings that would be bestowed on them by the ‘Muck Olla’.

Hey, that sounds familiar, right? Also: some stuff about horses and goddesses. We won’t go into that.

Playing pranks (the “trick” to your “treat”) dates as far back as 1736 in Scotland where Samhain was sometimes known as “Mischief Night”. By the time Scottish and Irish immigrants started coming across the Atlantic to America, there was a strong tradition of dressing up and playing pranks. Going door-to-door collecting food (e.g. trick-or-treating), therefore, could have come from collecting food for the feast, fuel for the Samhain bonfires and/or offerings for the spirits/fairies.

But what about all the saints and souls day stuff? All Saints day was originally celebrated on May 13 but was changed to November 1 in 835 by Pope Gregory IV. Ultimately, in Britain, popularity for Halloween waned after it was pointed out during the Reformation that these customs were rather “popish“, but as they had been celebrated in other places (notably Scotland and Ireland) since the Middle Ages, the holiday is still observed in some form or other. 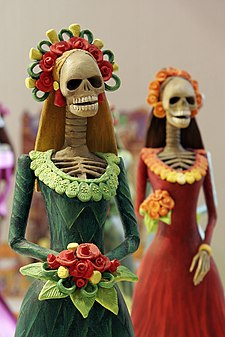 But what about Dia de lost Muertos, or Day of the Dead? How does that fit in? you ask. Well…

Like All Saints/All Souls Day, Dia de los Muertos is an opportunity to pray for and remember your deceased loved ones. Though it shares similarities in theme and timing as the Catholic observances, scholars trace its  history back to indigenous observances of the Aztecs. That’s right, the freaking Aztecs, yo. [look it up] It’s not actually all that surprising, when you think about it, since the basic premise is just remembering your dead, something that pretty much all cultures and religions do at some point and in some way. The skulls and Catrinas are specifically descended from some of those early celebrations.

So, there you go. Another perfectly good Catholic feast day demystified. Actually, many modern Christians reject the idea of Halloween because they believe it originated with pagan celebrations (which it kind of did) and officially the Vatican has condemned the traditions commonly associated with Halloween as being “anti-Christian”. [4] But that’s okay because:

Father Gabriele Amorth, a Vatican-appointed exorcist in Rome, has said, “if English and American children like to dress up as witches and devils on one night of the year that is not a problem. If it is just a game, there is no harm in that.”

If the Vatican’s exorcist thinks it’s okay, it can’t be all bad, right?