Hey Wizards of the Coast. I have a request. Let’s see more female creatures, yeah?

Depictions of women in Magic are not entirely uncommon. It’s often enough that a deck will have at least a couple. And yet, when I think about creatures — specifically non-human creatures — almost always they are shown as masculine. For example, Selesnya Sentry:

Now, that’s a generic creature card. The creature type is Elephant Warrior. There’s no specific reason it needs to be male. Why can’t an elephant warrior be female?

Typically female creatures in Magic are reserved for more traditionally “feminine” types — Faeries and Angels — or androgynous races like Elves. In the history of Magic, I can only recall ever seeing one female goblin, the repulsive Hasran Ogress. 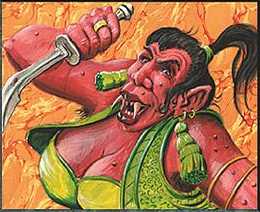 And often when you do see female creatures or characters in MtG art, it’s for T&A purposes. 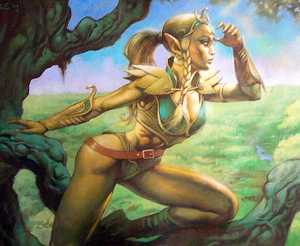 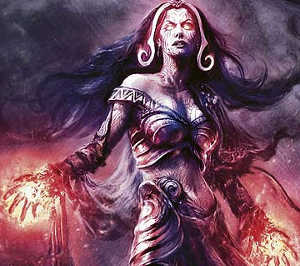 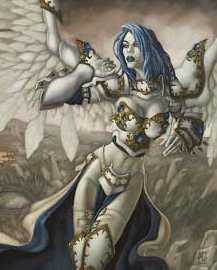 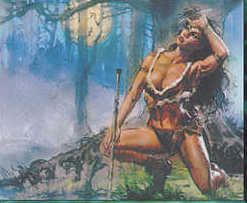 Surely, Wizards of the Coast, I don’t need to remind you that women are just as capable of performing tasks that men can, and that their sole purpose on this (or any other) planet is not simply to look hot for men. I mean, seriously, of those costumes above, in what way are any of them even remotely useful for the tasks that those women might be performing (unless underwear model is a popular profession amongst Elvish rangers in Phyrexia…)?

I applaud you for adding the Planeswalker, Chandra Nalaar, to the core sets and making T&A distinctly absent from most of her depictions.

But we need to see more of this. There’s nothing remotely resembling gender equality in the Magic: the Gathering universe.

Here’s why it matters to me personally. As players, we anthropomorphise our creatures. We say “I attack with this guy.”

“I attack/block with this guy” is much more common than “I attack with her” (unless you’re playing an Angel or Faerie deck). And this matters. It matters in how we think about women as people, outside of the game, and it matters in who is interested in playing the game (more realistic female creatures and characters that weren’t just there as sex objects would be more likely to attract more female players). Magic benefits from being a distinctly social activity — you play with other people — if you’re a woman walking into a game shop and the only people playing are nerdy dudes, you’re probably not going to be very interested in playing Magic. Certainly you’d be less interested in the game than you might be if the gender balance was more level and you saw other women like you playing.

Magic is also unique in that there are no specific playable characters — you’re benefitting from the fact that you don’t pigeonhole your players into a specific gender role the way video games with a single male protagonist do. But then you throw away that advantage by showing women in provocative poses, depicting them as objects for your male players, to be manipulated, moved and sacrificed by your male players, without providing an alternative. Tits and ass is fine provided that that’s not all there is, and provided that you give your male characters the same treatment.

My kids are playing Magic. I have a boy and a girl. They are 9 and 7. They are playing as I write this. I would like them to grow up with Magic as an empowering game for boys and girls, that depicts gender in fair and realistic ways and does not objectify women exclusively the way so many other games do.