we rarely (if ever) go to movies in the theatre anymore. this is sometimes depressing when long awaited films are released in the theatre that we really, really want to see. as the kids get older (particularly our youngest), scheduling a block of 4 or so hours where they can be sat by the grandparents will be easier, but up to now it wasn’t really reasonable to expect that they’d do alright for that stretch of time. currently, we’re struck by the frustration about not being able to see the current harry potter movie.

most of the “new” movies we watch are via netflix. i hope to make this a sort of ongoing series in which i review movies that have been released fairly recently on dvd (or, you know, not) that we got via netflix. i have a problem (moral, ethical) with downloading torrents of cammed or otherwise pirated movies that are still in the theatre. besides the fact that they are usually sub-par quality in some regard, besides the fact that, you know, it’s illegal,  i actually want to give filmmakers i appreciate money, even if that’s just royalties from a netflix rental.

so, we watched the watchmen yesterday (saying that feels a little postmodern; “who watches the watchmen” is a tagline and theme in the film and comic books).

the watchmen movie was something i was anticipating for a couple of years, ever since the actuality of it was mentioned via a doomsday clock counter to the movie release in an issue of Wired. creator alan moore has gone on the record a number of times saying that making a film of the watchmen should never happen. half of the message of the watchmen is in the medium of the comic book, and that gets lost in the translation when you move it to moving pictures. that hasn’t stopped studios from trying, and failing, to find ways of adapting it to the big screen. finally, director zach snyder was approached, and realized that if he didn’t do the film, someone else (with less regard for the original material) would, and it would suck.

but at least it’s better than it could have been.

seriously, i really wanted to like this movie. a lot. the graphic novel changed the way i read comics. it did that for a lot of people. it changed the face of comic books as a whole, and opened the path for a new generation of comics authors to come through and communicate real messages and stories through pictures and speech bubbles. the comic just has so many layers, i could seriously talk about it all day. my first exposure to it, in fact, was in a class on non-traditional narrative storytelling in college (in which comics were a big part, as were music videos, and, to a lesser extent, roleplaying games (something i added via a presentation and simplified game system me and a friend built)). it took what i had up to that point accepted as standard comic fare and turned it on its head, ripped out its guts, and prodded the remains with a stick while making analytical comments about the state of not only comic books and comic book storytelling in general, but also of the state of society and world politics. it told a story that was both about comic books and comic book characters and contained within a comic book with comic book characters while simultaneously telling a dr. strangelovian story about the cold war, and an alternate history of what the world would be like if our involvement in world war ii and viet nam were unquestionable victories. The Comedian, whose murder begins the cycle of events that are contained between the covers of the graphic novel and shot on the big screen, makes a self-referential comment about this in a flashback memory of superhuman Dr. Manhattan at his funeral in which he suggests the idea that “it might have driven us a little crazy” if we had lost the war in viet nam, “as a country.” (which, thanks to dr. manhattan, we didn’t.) 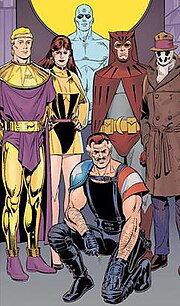 this kind of hypothetical alternate reality is the backdrop of the story, and it’s what drives the story. as you turn the pages of the comic book, you are forced to think about alternate outcomes of historical events, and about the personification of the united states, i.e. what kind of person would the united states be if the country were a person. what would that person look like? act like? (alan moore is british.) the images in the panels in the book get burned in your memory with these ideas that the story stirs up, and it’s something that, even after the 10 years since i first read it, still lingers, fresh and raw, like a scab.

The individual comic books make up 336 pages, not including some of the supplimental extras that can be found in the graphic novel that add further backstory and articles. certainly, then, you can make a 120 minute film out of that, right?

the film fails in every way that the comic succeeds. blood, gore, violence, the slaughter of our enemies in war, the obliteration of millions of people in nuclear holocaust, these are things that, when seen in vivid painted colors on a page can be disturbing and memorable and haunting, but still just imagined pictures and thoughts. being brought to life demystifies these images. by representing them visually through high definition special effects with real actors, the very same images become farsical, unrealistic, gaudy and bad. it’s like the difference between fountains of blood in anime and the same  fountains of blood in hong kong kung-fu flicks — in anime, it visually represents the intensity of the situation and implies things that are communicated through subtext in a non-literal sense. when you add actors and fake blood and severed limbs, the whole thing looks like the black knight from monty python and the holy grail — a joke, stupid, and unrealistic. the gore and violence in the watchmen movie had the same feeling for me; lame, stupid, overdone. even as i’m watching and i know that most, if not all of these actions are mirrored almost exactly from panels in the book. the subtext, the implied message is lost in the translation when it moves from images you imagine in your mind when you read the comic to when you see it played out in vivid realism on the screen. even the sometimes two-dimensional-ness of some of the characters in the book — they’re two-dimensional because they are, in fact _two-dimensional_; images on paper with narrative and speech bubbles, you fill in the blanks with your own assumptions and feelings. in film, they’re just two-dimensional and unrealistic.

i knew, before watching, that the movie would not be as good as the comics. you sort of always know this when you go see a movie version of a book you’ve read, but you go anyway because you love the story. i knew that, even though the watchmen diehards thrashed the film, i would watch it. and i was still disappointed by the huge gaps that were missing (that can’t realistically be included in the film without causing it to span 5 or so hours), and the hollywood-ness of the action, costumes, and special effects. and i know, this is pretty much the best that a watchmen movie can get.

the books are better.  i’ll stick to the books.