I recently got a copy of Borderlands sort of for my birthday.  If you keep tabs on my Twitter feed or, for that matter, my Facebook updates, you will know that there was some issues getting the second computer up to a point that could run Borderlands.  Borderlands is like the first new (and by new I mean recent/modern/up-to-date as opposed to just new to me) game we’ve gotten since.um…well, probably Guild Wars (at least the Eye of the North expansion), or maybe Civ IV or Heroes V(although both of those were unimpressive enough to no longer be installed on our computers — we still play Civ and Heroes 3).  I guess there was Spore.  You get the picture…there isn’t much in terms of new software gaming installed on our machines and therefore one of them required the obligatory graphics card upgrade to get Borderlands to run.

This was the first time I tried purchasing a game via Steam, and I have mixed feelings about it.  on the one hand, no one had it in stock and I wanted it RTFN .  I could have ordered it on amazon, and maybe even saved a couple of bucks, but I would have had to wait for shipping.  Or I could download it on Steam, let it download overnight, and have it the next day.  Not exactly instant gratification, but better than shipping.  On the whole, I wouldn’t choose Steam over buying something from a store from real humans – even considering the couple bucks saved on sales tax – but it definitely beats shipping and it’s nice to know that there’s no disc to worry about, and if I ever reformat my computer (likely to happen when I try to go from Windows 7 RC to Windows 7 Home), it’s just a 4 hour download away.  (it would have been nice to know that I could have gotten one copy, a crack from MegaGames and played it on both computers, but I was guessing that wasn’t possible anyway for anything other than a single player game.)

Once the game downloaded, and i upraded the nvidia geforce 6600 to a 8400gs (matching the 8400gs I already had in the other computer), everything was set.  We played around in single player for a while getting reacquainted with a FPS and used to the environment and controls.  I’ll be honest, I haven’t played a FPS really since college, which is about 10 years ago now.  I played Quake and Doom at the beginning, so I was right up there in the early days, I even played Quake online (and got sufficiently pwnd).  When I got to college, me and a couple friends had LAN parties and we played games like Blood and Blood 2, Quake, Quake 2 and the Quake mod Future Vs. Fantasy, Rainbow Six, Delta Force (and Delta Force 2) and, later, Unreal and Unreal Tournament.  There’s a big difference (to me anyway) between playing through the campaign in Unreal or Quake and playing something competitive like Unreal Tournament, and after I graduated college, I really lost my taste for first-person shooters.  The gore was overdone, and there wasn’t anything that kept me interested in the game since I didn’t have friends to frag and insult.  And I knew I couldn’t compete online.  So I gave up the FPS genre, I thought, for good. 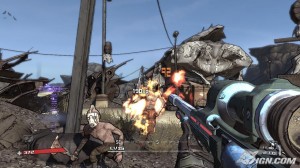 About a month or so ago, Erin and I were talking about MMOs and she said that there should be one that was like a wild west MMO or like a Trigun/Cowboy Bebop/Firefly-style space western.  Just days later I saw a 2 page ad in Wired for Borderlands.

Borderlands touts itself as the best of both worlds – full RPG leveling and experience-based character progression, in a first-person shooter.  Really, it plays like an FPS with benefits.  And it’s not really role-playing in the way that maybe Morrowind or Fable are role-playing – where your decisions change the course of the world or the story (at least it hasn’t seemed like that yet).  But it’s definitely a step far above the grind of frag-respawn-die-respawn-repeat.  The story, and more than that, the setting is engrossing, and, while the gore is still over the top, it’s a lot more rewarding to blow the head off a skag that’s trying to rip your face off than to see a random bot explode into a million pieces (and, so far, I haven’t seen anyone turned into chunks by a critical hit — edit: yes, i have).  And it really is equivalent to Trigun:the game in terms of setting.  The game has a sense of humor which earns it a lot of points with someone who has less patience with typical first person shooters – the characters are funny and compelling, and the robot, Claptrap, steals the show with his beatboxing and dancing and running away in terror. 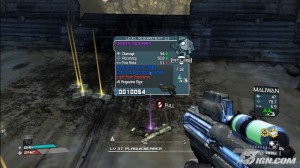 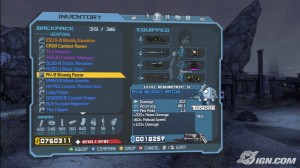 The game claims to have millions of guns possible to pick up in-game.  I wouldn’t know about the millions part, since I haven’t seen millions, but certainly a driving force in the game is finding the best, shiniest, most bad assed hand cannon you can.  You spend more time than necessary lusting after guns you can’t afford at the in-game vending machines, or debating over the benefits of this gun over that one.  The variety of weaponry ensures that whatever your gameplay style — whether you’re a camper or more likely to spray-and-pray — there’s something in there for you.  Advancing further into the game you start to find weapons that do elemental damage, like burning or electrocution. 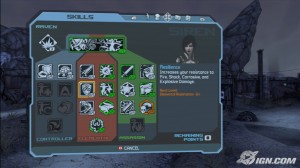 There are only 4 playable characters, but between the four, you pretty much have your bases covered.  There’s the sniper/ranger class, the default soldier class, a unique “Siren” class which specializes in speed and elemental damage and has a really cool teleportation skill, and the tank class.  Like a normal RPG, the weapons and enemies progress as your character progresses, and there’s a skill tree and weapons proficiencies that allow you to tune your character even more for your unique playing style.  Many of the skills are passive, applying percentages to accuracy or critical hit damage, so you don’t need to worry about a lot of extra keys while you’re blasting away.  However each of the 4 characters has a special skill that only they can use, that can be leveled and earns bonuses as you progress; the soldier can drop a gun in front of him that acts like a turret, the sniper has a bird that he can throw at enemies for a special pet attack.

Also for players who are new to first person shooters, though there are no resurrection kits or anything like in a traditional RPG, instead, teammates just need to stand over you and hold down the action key for a few minutes to revive your fallen character.  So, the more people you play with, the more chances you have to be rez’ed when your character goes down.  And that’s only after you have a chance to shoot that one (or twenty) final shot(s) that takes down the bad guy.  Yeah, one of the coolest innovations in the game in terms of gameplay is being able to shoot from the ground as you’re dying, and if you manage to take someone down with you, you receive a “Second Wind” which recharges your shield but gives you limited health points, so you can get back in the game even after you’ve been fragged.  So let’s recap – you get tagged and are going down, first you have an opportunity to come back if you manage to take down one of your enemies.  If you don’t (or maybe one of your teammates gets the kill), your team can run over and revive you on the field.  Failing that, you go back to the last save point (which are fairly frequent), and have a percentage of your cash deducted.  That’s it.  Resurrection costs money, not xp or life, or anything else, just cold hard cash.  There’s a moral in there somewhere. 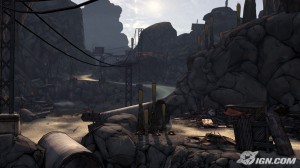 There’s enough in Borderlands to keep you interested even if you’ve sworn of shooters.  The artistic style is unique and looks good even on the baseline graphics cards (as an aside: the nvidia 8 series is the lowest level nvidia card that still has a physics engine, so there isn’t a way out of it by hotrodding or overclocking your card unless you know how to program and embed a physics engine on there as well).  And there’s plenty of room to just run around and shoot things.  Not only that, but doing so is encouraged as well – there are special bonus tasks that you get extra xp for completing; last night I just completed the Get Off My Lawn task after putting down an Elder Skag and a couple of his buddies.  I’m sure there’s someplace that lists all the tasks (edit: there is), right now it’s just sort of a random “hey, I just got bonus xp” occurrence for us.  The overall story is to find “The Vault” which can be loosely described as a stash of ultimate stuff that will save the planet.  Yeah, we all know it’s empty (–edit: okay, maybe it’s not…), but as you progress, you are visited by a strange hologram girl who essentially acts like a cheerleader and guides you along the path to the vault.  Individual quests are filled with the idiosyncrasies of the NPCs that give them, like the guy who got his leg eaten off so now he can’t plant his crops and you have to venture into Skag Gully for him to collect seeds . 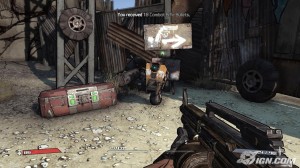 Borderlands is pretty  much awesome, and it’s a visual treat – definitely filling that gritty, middle of nowhere, frontier fix.  And fans of Trigun will recognize many similarities in terms of the setting, the mix of wild west and far future, and the types of characters both playable and that you meet.  It’s definitely the best new game that’s come along in a long time, with a lot of cool innovations that more than make up for a few failings.