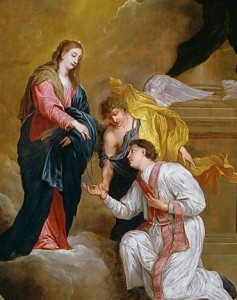 as today is yesterday was valentine’s day, and also, coincidentally for some, the traditional day of rest and reaffirming their faith in their chosen higher deity, i thought it would be appropriate to take a minute to ponder the origin of the holiday.  partially, this was influenced by @KarinaAllrich‘s tweet earlier today that “Valentine’s Day on a Sunday just feels wrong.”  i thought, well, it shouldn’t, really…after all, saint valentine’s day is originally a roman catholic feast day, right?

well, let’s just see about that.

of saint valentine, the actual person, very little is known.  in fact, it’s not even entirely clear if valentine was one guy, or several guys from the same general period all named valentine.  valentine could have been 1) a priest in ancient Rome, 2) a bishop in Interamna (Valentine of Terni), or 3) a martyr in the roman province of africa (of whom all that’s known is that: he was a martyr in africa).  to make things even more confusing, though valentine of rome and valentine of terni were two different people, both are buried on the via flaminia.  the official feast day of saint valentine on february 14 was established by pope gelasius i, who included valentine among those “whose names are justly reverenced among men, but whose acts are known only to God” — which is to say that even he didn’t know anything about valentine the man/martyr.

the popular vote seems to go to valentine of rome, of whom either more is known, or more has been fabricated — take your pick.  the story goes that valentine was persecuted as an early christian and personally interrogated by emperor claudius ii.  claudius was impressed by valentine, and tried to get him to convert to roman polytheism.  when valentine didn’t and, instead, tried to get claudius to convert to christianity, he was sentenced to death.  while imprisoned, he cured the blindness of his jailer’s daughter.  an embellishment to the story by American Greetings has valentine sending the very first valentine to either his lost, secret love, or the jailer’s daughter, or both (i.e. the jailer’s daughter is his lost, secret love), signed “from your Valentine.”

but besides the contemporary fabrication, there is no relationship between valentine and romance until geoffrey chaucer in 1382 in a poem he wrote honoring the first anniversary of the engagement of king richard ii to anne of bohemia.  the verse in question goes:

For this was Saint Valentine’s Day,
when every bird cometh there to choose his mate.

the poem is set in a fictional context of a long history of valentine’s day commemorating romantic love, but, in reality, no such context exists.  in addition, while it is largely assumed that chaucer was referring to the valentine’s day on february 14, mid-february is not the most apt time to find mating birds, and it has been pointed out that chaucer might actually have been referring to the saint valentine’s feast day that occurred according to a different liturgical calendar, such as May 2nd, the feast day for Valentine of Genoa. 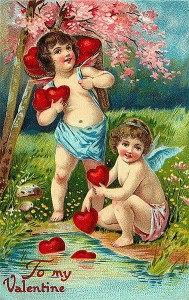 nevertheless, during the middle ages and the renaissance, this idea of valentine’s day being about love and romance proliferated  like bunnies, and the earliest-surviving valentine is from the fifteenth century from charles, duke of orleans, to his wife.  in the late 1700s, the practice of sending a valentine to your loved one became mainstream, with the conversion from traditionally hand-made valentines to mass-produced, commercially purchased valentines becoming the norm around the 19th century.