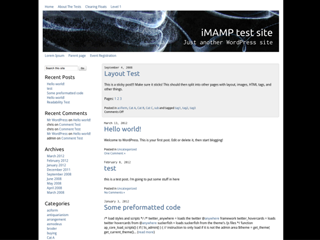 So, the jazzsequence.com redesign is still on (or at least planned), but I figured, since I just got a theme hosted in the WordPress.org themes repository, I might as well make it, you know, my theme so that at least one person is using it live, right? So here it is: Museum Core. I’ve also disabled WPTouch so if you’re looking at it in a mobile browser, you can see it in all its responsive glory.

I’m really excited about this theme. Not just because it’s badass and not just because I spent over a year developing it. Those things, too. But because…wait, no, it’s pretty much because it’s badass. I learned a lot through the whole process, particularly the theme review process, and it took over a month of revising and revising to get this (my first (accepted) submission to the repository) actually hosted on WordPress.org. It’s no small feat. It requires dedication, the ability to take criticism, and willingness to adhere to WordPress’ (high) standards. I don’t say that to pat myself on the back. I say that because it’s effing hard. Okay, yeah, and to pat myself on the back. A little bit. But possibly WordPress says it best on their page about why you would want to host your themes on WordPress.org:

The goal of our themes directory isn’t to have every theme in the world, it’s to have the best.

That’s their words, not mine. I certainly wouldn’t call my theme the best. But it’s damn fine (if I do say so myself) and I’m going to stand behind it and show it off for a little bit by making it the theme for my website. I’m allowed to do that. If you want to download it, go get it here: Museum Core.

“If we crop out the fat kid, will it knock the file size down enough?”

Indeed, that’s what I’ve been doing with this blog lately. I suppose I’m still in the #postaweek2011 game if you include Tumblr posts like the the sexy sax man one. But otherwise, yeah…

But it’s not because I’ve been sitting at the computer playing video games or anything.  Doing support for Event Espresso takes up a regular block of time that I would — if otherwise unoccupied by client work — likely be using to post stuff here in my procrastination from other projects I should be doing.  I’ve started a netlabel and have been working with Geoff from The Raygun Girls and Dan from Synaptic Disturbance on producing Synaptic Disturbance’s RPM2011 album.  I’m also working on a new theme for Museum Themes that I’m planning on debuting on the Plague Music site when it’s done.  I just finished a major project that included a custom post type plugin with custom taxonomies to support product information sheets like this one.  And I’m working on another new project for a ministry in the war-torn Democratic Republic of Congo where — if you look them up on Wikipedia — you can find images of child soldiers.  On top of all that, I’ll be heading out later this week to California to go to my grandfather’s funeral, who passed last Friday evening.

I also got an email yesterday about a $65k-100k/year permanent position as a systems analyst / web developer position that would essentially mean giving up all of the above and making more cash doing it.  Oh, and due to a chicken pox outbreak, all unvaccinated kids aren’t allowed back to school for 21 days (which, as of yesterday, they revised to April 8) which applies to our son (we’re getting him vacc’d today, and will hopefully have him going back tomorrow or Thursday).

All this adds up to things being very busy around here and I haven’t had time to post.  Oh, I should probably also mention that my wife has decided to start writing a novel.  Which means that I want to start writing a novel.  So there’s that, too.  Right.  So, I’m not asking for a pity party or condolences about my grandpa or anything like that.  I had this idea for a post about how we’ve gone from a digital culture with almost an infinite number of providers for various products and services to a digital culture with a few key players (in the wake of the Zune being pulled from the market and various internet startups being swallowed up and integrated into behemoths like Google), but you can understand I haven’t had the freaking time! And at the end of the day, who the hell wants to write about crap like that after, you know, doing work all day?  I also had a post planned for a blog that shall not be named about getting a vasectomy — and how it’s not a scary thing that guys (like me) should run away from, screaming — but, again, time (and inspiration) == nil.

So give me a freaking break, will ya?

We do not aim to lead the industry by doing designing and development the best the way other do but instead, we aim in inventing new dimensions and tangents of vision and creativity by following the best practices and developing them into the art of ism. With this mission we understand that every single minute, most acts, and ideas will need continuous self-assessment, self-improvisation, and demonstration at every phase. We believe in prophesying the design industry rather succeeding…

The idea of what logo to design, to create a custom website design and keeping professional graphic design is a confusing one with designers ready at every corner to challenge your satisfaction. What do you make? Is the design perfect? It is all very dizzying.

– This is a real company.  Ferozi Technologies